What is the Promoter Score Notes? 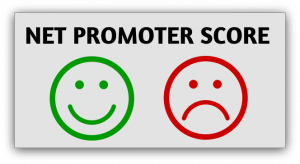 TheNet Promoter Score it's ametric of customer loyalty developed in the 2003 by business consultant Fred Reichheld of Bain & Company in collaboration with the company Satmetrix. The goal was to determine a rating of customer satisfaction clear and easily interpretable.

The question asked is always formed: "Based on his experience, how likely would you recommend the company / brand / product X
to a friend / colleague / relative?

The NPS is based on the fundamental perspective that customers may have of each company, they can be divided into three main categories: promoters, Passive and detractors.

The Net Promoter Score is calculated as the difference between the percentage of promoters and detractors. TheNPS It is not expressed as a percentage, but as aabsolute number between -100 e +100.

Do not make the common mistake of putting a percent sign (%) behind your NPS score, It is not apercentage.

What is the average Net Promoter Score?

To give an indication: the second ReichheldAmerican companies on averageThey have fewer scores 10  NPS, while the most important organizations from 50 e 80 NPS. These values ​​often vary greatly from industry to industry and from culture to culture.

To understand the reasons for promoters and detractors is advisable to accompany the application with one or more NPSopen questions analyzing the reasons that underlie the assigned score. This allows you to make the appropriate changes to increase future NPS, either by increasing the percentage of promoters, either by reducing the percentage of Passive and detractors (O, even better, a combination of both).

From the scientific point of view and in certain market research circles there is someskepticism aboutNPS. Opponents of the NPS concept argue that there is insufficient scientific basis for the result and that the model is too simple. They maintain customer loyalty and satisfaction is not achieved only through numbers and percentages, but also causes, consequences and correlations.

In addition to the NPS method can notaccurately measure the behavior ofcustomers. Customers can recommend a company or product in a greater or lesser extent, but it is not actually shown that they themselves then put into practice. In addition to this, the recommendation of a customer is not always the same value as that of another. It 'also a fact that the NPS is most useful in markets with lots of competition where potential buyers have a greater tendency to ask friends or acquaintances for advice, before deciding on a purchase. NPS Another limitation is that it takes the view not only of current customers , but also the opinion of no customers who can act as detractors and generate word-of-mouth bad.

It is therefore required some caution. It is obvious that the NPS on their own may not be sufficient as a management tool, but in the right context and with somefurther motivational discussion It can certainly be a useful metric. Its greatest strength is its simplicity, making it functional and interpretable for all parties interessate.Considerando the large number of big companies that use this tool continuously, surely it has proved its worth.

To be clear, NPS is just apoint ofdeparture. After analysis, the real work can begin: improve the organization and take actions to increase your NPS. This will be a long-term project, but the NPS allows to perfectly assess at what stage the organization is in this process of growth.

View all posts by: root

WhatsApp us
We use cookies to make sure you can have the best experience on our website. If you continue to use this site we assume that you will be happy.OkRead more